Sneak Thief is an Early Access burglary simulator that has you attempting to break into various properties – both residential and commercial – looting everything in sight and getting out of dodge before you’re spotted. It has potential, even if it is a little rough around the edges.

Starbreeze Studios are back with another piece of downloadable content (DLC) for their money-printing title Payday 2. This time, it’s in collaboration with an action movie, Point Break. It’s one of the better DLCs they’ve released.

A somewhat disappointing heist/robbery game on mobile, Robbery Bob has now snuck onto Steam under the pun-tastic title; Robbery Bob: Man of Steal. While a decent effort has been made by Level Eight to port it onto PC, Robbery Bob is still held back by the same flaws.

Our overriding summary of Battlefield: Hardline is that it’s far too much like Battlefield. Sales and concurrent user statistics would suggest that a lot of people feel the same. The DLC for the game could have been one area where Visceral Games and EA Dice looked to make it stand on its own two feet. Instead, they’ve gone for the same exact formula of the BF4 expansions. Disappointing.

A rogue-lite robbery game developed by Size Five Games, The Swindle is an alternate timeline, Steampunk-inspired robbery game that has some grand ideas. Unfortunately, they don’t all pay off - and corners have been cut all too obviously.

Shark Punch, a small Finnish/American team of developers, have created an entertaining, challenging but often frustrating game in The Masterplan. Those looking for a real-time tactical challenge will find lots to love, but those who are more into straight up action should look elsewhere.

With world-leading attention to detail, a wicked sense of humour that perforates every nook and cranny of the game as well as some of the finest character development and voice acting anywhere in gaming, Grand Theft Auto V is the best heist game around today.

Battlefield Hardline is in a weird place. It's a weird project in general. There's very little gameplay wise to set it apart from Battlefield 4. It feels exactly like Battlefield 4 in the midst of multiplayer battles, with the only thing that really sets it apart from its bigger, near identical brother being some barely used game modes and a for once decent single player campaign. 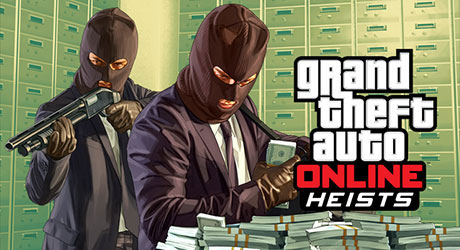 Heists, a brand new 4-player cooperative experience for GTA Online, giving players the chance to team up to pull off a string of intense multi-part heists, raids and robberies.

Featuring an impressive new heist and a great additional weapon, this collaboration between Overkill and Devolver Studios is an idea that I’d potentially like to see more of – as long as it’s handled properly.

Pocketwatch Games had been working on Monaco in one form or another for a really, really long time. In its early state, it was winning awards at games festivals way back in 2010. When it finally released in 2013, it was everything that followers were hoping for.

Payday: The Heist, developed by Overkill, is a team-based, multiplayer-centric first person shooter built around complex heists that require the use of tools, weapons, planning and teamwork.

Grand Theft Auto: Episodes from Liberty City includes both The Lost and Damned, and The Ballad of Gay Tony together and does not require a copy of the original Grand Theft Auto IV to play....

What does the American dream mean today? For Niko Bellic fresh off the boat from Europe, it is the hope he can escape from his past...

An aging 3D point-and-click/adventure/puzzle game, Sherlock Holmes: Nemesis (also known as Sherlock Holmes vs Arsene Lupin in some parts of the world) brings a faithful adaptation of the character to PC – with puzzles that would have stumped the famous detective himself.

Five years ago Carl Johnson escaped from the pressures of life in Los Santos, San Andreas...

Welcome to the 1980s. From the decade of big hair, excess and pastel suits comes a story of one man's rise to the top of the criminal pile as Grand Theft Auto returns...